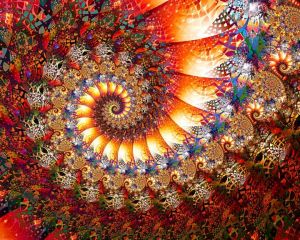 Patterns are maintained by consistently giving energy to a system of power. I choose freedom from the routines, from the patterns, from the human collective. My life is about walking each moment in full awareness, forever touching it, honing it and knowing it through the grandeur that is our existence here upon this earth. –  Becoming Awareness

I like to imagine the entire Universe as a giant fractal. Each component within the fractal is a pattern that constantly flows and becomes more than it is as it continues to touch the original pattern and while eternally morphing into something different and new.

The above quote comes from my book in a chapter entitled Habitual Patterns and Thought Forms. I’ve often discussed the importance of recapitulating the historical patterns that have been handed down from generation to generation. Many people allow these patterns and associated thought forms to serve as the foundation of their reality without ever attempting to become aware of their own true nature free from these patterns.

In order for us to hold a pattern in our minds, we must push away the rest of the fractal. When we do, we are no longer fluid; we become fixated or have fixated the position of our assemblage point. If you define someone with a word, you negate them. By giving someone a label, you eliminate all of the other things that they could be. At the same time, you are creating them to fulfill that definition because you have defined it to exist. You have defined them as a single pattern within the fractal.

Don Juan told Carlos Castaneda that, The New Seers are the only ones who have the sobriety to see the mold of man and understand what it is; the pattern of every human attribute we can think of and some we cannot even conceive. We are what it stamps us with.

Don Juan told Carlos that he had to go beyond the mold, that the mold was merely a stage, a stopover that brought temporary peace and serenity to those who journey into the unknown, but that it was sterile, static. It was at the same time a flat reflected image in a mirror and the mirror itself. And the image was man’s image.

We are each taught to live our lives based upon the myths that have been passed down through centuries. There are thousands upon thousands of myths and their primary function is to provide us with a model that helps us to activate our unconscious. When this occurs, we can then integrate the unconscious into our consciousness. When we connect with our unconscious, we move beyond the patterns that we have upheld throughout our lives and our unconscious allows us to realize the unlimited potential that lies within each of us.

Buckminster Fuller said, You never change things by fighting the existing reality. To change something, build a new model that makes the existing model obsolete.

Our true crisis in this world is the inability to experience consciousness.

Let go of the patterns within the fractal and free the fractal, of which we are each a part, so we may continue to flow, change, and create ourselves into becoming the most of what we are capable of truly being. We must rise to the task of being the true creator beings that we are each meant to be.

7 thoughts on “The Universe is a Giant Fractal”

This is an educational website. It does not own all of the pictures herein, nor does take it credit for them. Some of the images used were found through browser searches and by utilizing stock images from free image and wallpaper websites. If you are the owner of an image and are not acknowledged, please let us know and we will either credit your work or remove your picture at your request.
© 2022 Female Warrior.
All Rights Reserved. If you share these posts or quotes please include a link to: http://femalewarrior.net
Follow Female Warrior – The Toltec Path on WordPress.com
Loading Comments...
%d bloggers like this: