If you want to find the secrets of the universe, think in terms of energy, frequency and vibration. – Nikola Tesla.

In the beginning the word existed. So what was the word? The word was the sound of Source energy, God, Intent, the primordial and ancient sound through which the entire universe was created. Some believe that this sound is Om and that the sound Om is also known as the embodiment of all sounds together. If one is to produce the vibration of OM with their intention directed at aligning with Source energy, they become one with the all that is. More than a chant, OM is a sacred syllable that represents the vibration of the universe. It is the sound of the infinite, without beginning and without end that embraces all that exists. The word that existed in the beginning was sound, the force of vibration through which all things began to take shape, to come into form.

Say you are sitting in the white circle on the far left side of this diagram. You are in the breath holding the intention of connecting with source energy which is at the far right side of this diagram. Aligning with Source energy is depicted in the center of the diagram, the neutral point, where the connection is made and with which you are now vibrating. You are resonating with Source energy. A beautiful flow of energy resonates back and forth in a continuous harmonic. 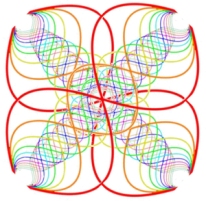 Three more people begin to resonate with Source energy just like you are. The resonant energy of four might look like the image on the right. This is what happens in a group meditation, a sweat lodge, or healing circle. As the resonant sound vibration with Source energy increases, the pattern becomes more complex and more and more people begin to resonate with these vibrations. It is the creation of a new pattern of energy, one that repeats itself in harmony with others. 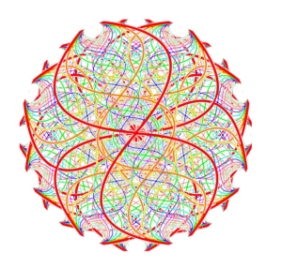 The sweat lodge is a great example. Let’s say there are eight people in the sweat lodge. The energy, once everyone has aligned with Source energy, will look like this; a living mandala and a microcosm of the universe. When this occurs, everyone within the lodge is energetically connected. A chant may begin from one of the participants and when the next person begins to chant, it may be a completely different sound but the two unique harmonies complement each other. Before long you will wind up with eight people chanting or singing their individual sounds while in utter and complete harmony with each other. It doesn’t happen during every lodge but when it does it is like an other-worldly dream of beauty and of sacred geometry. A beautiful and unique band of awareness.

The reason it doesn’t always happen is because not everyone is always capable of aligning with Source energy due to one of many reasons. They may be completely out of balance and have obstructions within their energy body which prevents them from flowing harmoniously. They may have their own personal agenda which impedes them from being in the flow with the other participants. They may be coming from a place of self-importance and are unable to get out of their own way and surrender. Maybe the water water pourer is noisy or out of sync. There are many reasons including emotions, energy levels, dis-ease, etc.

I talk about the pulse of the earth often. As more and more people continue to align with the energy of the earth in awareness, the energetics of the planet will continue to evolve and humanity will evolve by flowing in alignment with the sound vibration of creation. By liberating ourselves from repetitive patterns we will ensure our ability to generate positive vibrations in alignment with the primordial sound of the universe, the sound of creation. Together, in alignment with Source energy within our unique and individual vibration, we will be able to evolve as we raise the energetic frequency of the planet.

This is an educational website. It does not own all of the pictures herein, nor does take it credit for them. Some of the images used were found through Google image search and by utilizing stock images from free image and wallpaper websites. If you are the owner of an image and are not acknowledged, please let us know and we will either credit your work or remove your picture at your request.
© 2020 Female Warrior.
All Rights Reserved. If you share these posts, quotes and photos please include a link to: http://femalewarrior.net
Follow Female Warrior – The Toltec Path on WordPress.com
%d bloggers like this: