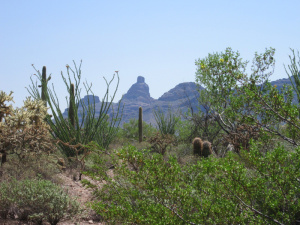 It is a sublime feeling,” he said, “to be in this marvelous desert, to see those ragged peaks of pseudo-mountains that were really made by the flow of lava of long-gone volcanoes. It is a glorious feeling to find that some of those nuggets of obsidian were created at such high temperatures that they still retain the mark of their origin. They have power galore. To wander aimlessly in those ragged peaks and actually find a piece of quartz that picks up radio waves is extraordinary. The only drawback to this marvelous picture is that to enter into the marvels of this world, or into the marvels of another world, a man needs to be a warrior: calm, collected, indifferent, seasoned by the onslaughts of the unknown. ~ Don Juan, speaking about the Sonoran Desert, The Wheel of Time

While driving through the Sonoran Desert last weekend I snapped this photo of the Buddha rock. I’ve driven past this natural monument countless times and never stopped to take a photo of it before.  Towering above everything else, the Buddha is an example of the constant magic unfolding in this extraordinary desert.

In The Active Side of Infinity Carlos said; The sky didn’t have a speck of a cloud. Nothing seemed to move. It was as if the whole world were hiding, but its presence was overpowering. The quietness of the Sonoran desert was like a dagger. It went to the marrow of my bones. And it does. The quietness is simultaneously symphonic and deafening. When a sound is detected it is not as though it begins, it rather emerges from the background, growing and joining with other sounds, and mounting to an enormous crescendo until, without warning, there is once again total quietness. It is here, in the absolute and total silence of the Sonoran desert, that all things merge and become one.

So what does one hear in the silence of the Sonoran desert. When you first arrive you hear nothing. The desert knows you are there and goes absolutely silent while weighing your presence. And then, a cicada. A practically undetectable breeze emerges and you hear the faint rustle of the mesquite tree and creosote leaves. The beating of a single raven’s wings overhead. The nearly inaudible noise that comes from a large ant mound nearby…millions of little tiny ant feet walking. Sound feeding on sound, getting so loud it’s just crazy.

And then, if you are lucky enough or open enough or perceptive enough or in the right spot at the right time, infinity speaks. It is a sound unlike any other sound, a sound that emerges amidst the chaotic quietness of noise in the desert and it doesn’t belong. And yet it does. The rational mind spins, trying to identify it, label it, define it. Is it a rockslide? Is it an approaching car? Is it???? And then sweet surrender to the sound allows you to realize that it is the sound of infinity. Abrasive and harmonic at the same time, sound feeding on sound. It’s what I feel is the whisper of the nagual, the sound amongst sounds that is there for one thing only. To completely shift your assemblage point allowing you the rare opportunity to merge with all other sounds, to become in that moment free of form. No distinction of sounds anymore, only a beautiful, warm and fluid symphony to close your eyes to and ride the sound into infinity. And then, pure awareness, presence, an emergence into the marvels of this world, another world, the unknown yet knowable.

This is an educational website. It does not own all of the pictures herein, nor does take it credit for them. Some of the images used were found through browser searches and by utilizing stock images from free image and wallpaper websites. If you are the owner of an image and are not acknowledged, please let us know and we will either credit your work or remove your picture at your request.
© 2022 Female Warrior.
All Rights Reserved. If you share these posts or quotes please include a link to: http://femalewarrior.net
Follow Female Warrior – The Toltec Path on WordPress.com
Loading Comments...
%d bloggers like this: